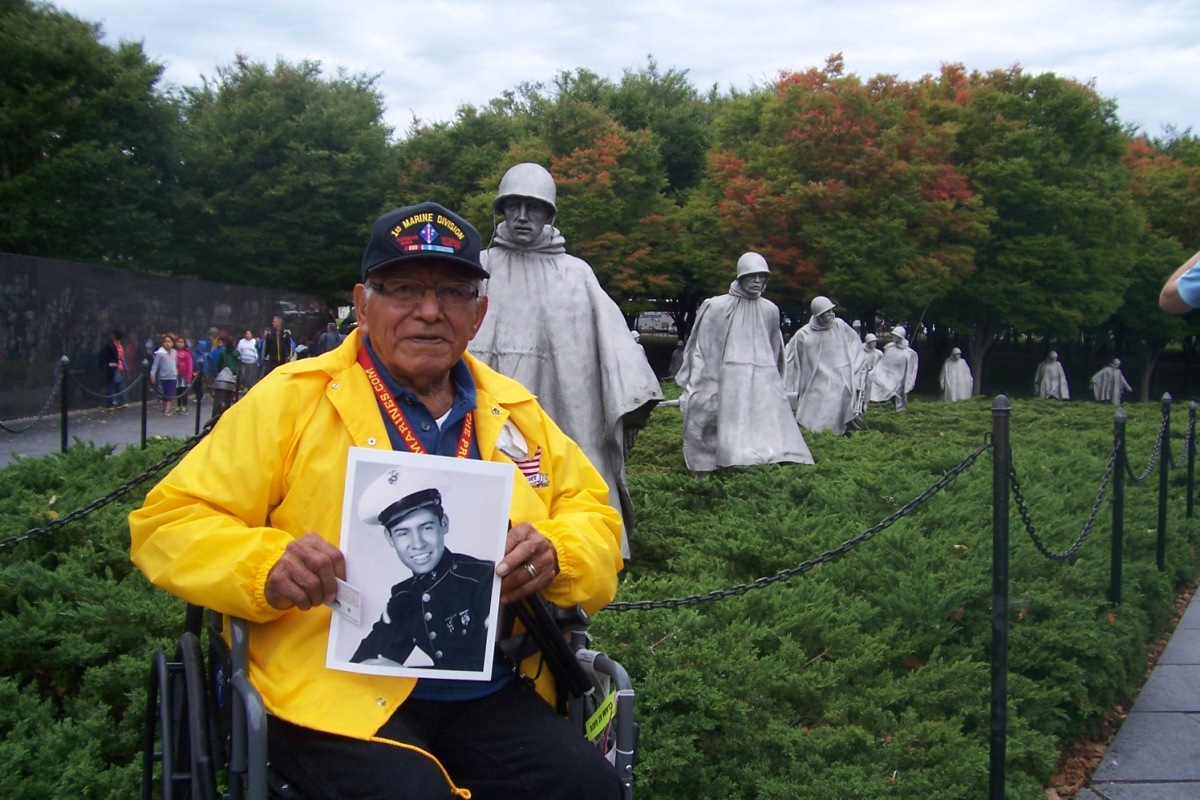 At the Korean War Memorial in Washington, D.C. on October 7th in 2013, I met a Korean War Veteran Daniel Lopez, 82, and his daughter Patricia Ehler, a retired army nurse. It was the day I flew to the capital as a guardian of Heartland Honor Flight with 92 veterans from both World War II and the Korean War and 80 volunteers.

After the photo session of Heartland Honor Flight ended, we had a few minutes of free time, and I studied the tall statues of soldiers in a marching formation. As one who grew up during the Korean War as a child, I had seen many American soldiers—on the streets or in our parish church on Sundays or in the crowded U.S. Military hospital where we school kids visited them with thanks you notes and entertained them by singing American songs we learned for the occasion, these statues were too large and weren’t friendly at all.

In my memory, American soldiers were always kind, particularly when they gave us hard candy or Hershy Bars whenever we bowed to them. And there, at the Memorial with the veterans–some taking photos and others walking around lost in thoughts–the Old Korea I remembered came back to life.

We children had our share of the tragedy of the war, that claimed 3 million lives, including more than 54,000 American lives, and vast destruction of civilization during three years.

We lost our school building as soon as the North Koreans launched the surprise attack across the 38th Parallel to the South Korean Army that turned it to a makeshift army hospital to treat injured soldiers brought back from the battleground.

As an adult, after I moved to the United States, I wrote about the war I remembered and the U.S. troops contribution to the nation which they saved at the cost of their lives. To say the least, South Koreans and the veterans share mutual respect and love as the “saved” and “saviors”; and like many Koreans in the Greater Kansas City area, I’ve been an avid supporter of the Korean War Veterans Association in the Kansas Chapter.

I almost didn’t notice a veteran in a wheelchair near me, his head bent and holding a large framed photo of a young soldier in his bosom. The logo on his baseball cap and his yellow jacket confirmed that he was a veteran from El Paso Texas visiting the memorial as I was.

Who’s the young man in the photo he was holding? I wondered. My childhood admiration and respect for the American troops rekindled, and mustering some courage, I walked to him and introduced myself. “Sir, I was nine-years-old when the first American troops came to Korea in July 1950.” The veteran immediately lifted his face toward me. It was hard not to miss his reddened eyed as he looked at me.

I went on. “It was a very difficult war to fight. Without you Americans, we Koreans had no chance against 95,000 Russian trained North Korean troops that milled down with 150 modern Russian tanks.”

“Thank you for telling me that” the veteran said in a rusty voice.

I told him: “I still remember that July morning in 1950 as vividly as it was last year. We waited for a long time on the main street, and finally a long line of American army trucks appeared in the cloud of dust, each holding an American flag on the hood. We had learned our first American motto that day, and with our teachers cue, we began to shout at the top of our voices: “Victory U.S.A! Victory U.S.A. Victory U.S.A.

“Our family had expected the worst: we began to pack our suitcases and backpacks to move to Cheju Island, and then we heard President Truman’s declare of the US Support of Korea, and like in a dream, you Americans were with us. We can’t thank you enough!”

Tears rolled down on the veterans face. Unsteadily, he stood, still holding the photo with one arm, and thrust his other hand toward me. “Daniel Lopez,” he said.

“Miss, no one ever thanked us for what we did in Korea,” he mumbled, his lips quivering.

It’s true. Without you Americans, we’d have merged with North Korea then and we’d be starving like most of the North Koreans. We’re forever grateful to you for saving us from the Communists.”

A woman in her mid-50’s rushed over and took photos of us. Afterwards, she introduced herself as the man’s daughter. “Glad to meet you!” she said. She must have heard my conversation with her father, because she said that it was wonderful for him to hear from someone who lived through the war and witnessed American troops sacrifices during their youth.

“Who is in the picture, sir?” I asked the veteran.

“My friend Isaac DelToro,” he said. “I lost him in Korea.”

I said I’m sorry, the worthless two words people say too often. This old soldier, who fought for our country’s freedom six decades ago, was still grieving for his best friend lost in country, but all I could say to him was “I’m sorry!”

Our group leaders urged us to board the bus, so I gave Patricia my name card and left them.

The following week, back home in Kansas city, I received Patricia  email: “This Honor Flight experience has been such a blessing for my father…It gave him some sense of closure…” She revealed that her father had severe sense of guilt for the fact that he survived the battle that killed his best buddy.

The two young men had been childhood friends in a small Texas town where most of the residents were first generation Mexicans. One of the reasons the two young men joined the Marines together at age nineteen was that they wanted to make enough money to buy homes for their parents, who struggled to feed their families. And they were young and fearless. Beside the fact that they were born 12 days apart in November 1933, they had big goals to save the world. And while they were in Korea, their companies were closely located, only about two city blocks apart.

The day Isaac died, October 3, 1952, his company named “Rifleman Company 1,Third Battalion, Seventh Marines” was sent out to charge the Chinese troops who had been terrorizing the local civilians, and the rest were to follow. But by the time Daniel’s company got there, the battle had ended and Isaac had died.

“First Class Isaac DelToro, armed with only a rifle and hand grenades, unhesitatingly charged the objective. Although painfully wounded by the heavy enemy fire, he continued to advance until he silenced the hostile emplacement, remaining with the assault forces until he fell to the ground unable to continue. Mortally wounded by enemy fire while being evacuated, Private First Class DelToro, by his daring initiative, outstanding courage and zealous devotion to duty, inspired all who observed him and upheld the highest traditions of the United States Naval Service. He gallantly gave his life for his country.”

Nine months later, on July 27, 1953, the war ended with the armistice, which was signed by the U.S. Military delegates and Chinese leaders, without Koreans, and the prisoners were exchanged at the “Bridge of No Return” in the town of Panmunjom at the 38th Paralle.

Daniel wasn’t at all glad that he was going home without his friend. He didn’t feel right about being alive when his childhood friend was buried in an unmarked grave in the Korean soil. How could he face his friend’s parents and his siblings? What would the townspeople say about him coming back alive without his best buddy?

He didn’t know then that he was suffering Post Trauma Syndrome, typically, the “Survivors’ Guilt.” An unexpected connection between Daniel and Isaac’s younger sister “Eva” was made, six decades after the two friends were separated.

It was the previous spring, after Daniel applied to visit Washington with the El Paso Honor Flight, which included his short bio and a photo of himself, which appeared on the Facebook page: “Honor Flight Spotlight” hosted by Congressman Beto O’Rourke.

Eva read it and posted a note, saying that she would like to meet with Daniel.

The meeting took place within days in Texas. Eva, who was only 4 years old at the time of her brother’s death, cleared the dark clouds that had been hanging over Daniel for more than a half century. She told Daniel that her parents had thought that the two boys had been killed at the same time and that they mourned for them; that even if they had known that Daniel came back alive, they’d have never blamed him for their son’s death but would have been glad for him.

And the greatest news of all for Daniel was that Isaac was the recipient of the Silver Star!

“It was another electrifying moment for Dad,” Patricia wrote. “As I read Isaac’s Silver Star citation to Dad, he wept in a way I had never seen him before. It was a reunion of the two friends–one in heaven and the other on earth.”